Today we were having the re-run of the match abandoned on the 19/02/2014. This fishery is a jewel in the South West, an Emerald. The secret is out, a fabulous Silvers fishery. So far the record on Emerald Pond is 97lb. Today’s match was Silvers only with no Carp of any description.

As I found out on the abandoned match there are plenty of Hybrids, Skimmers, Tench and bloody big Roach to 2lb.

I set up two identical Ronnie’s rigs to fish caster over caster and GB long lined on my top set.  I started out on front with lose fed GB laced with caster. After 2 minutes without a bite I knew things weren’t going to be easy I then hooked three Carp in a row, which really was the end of my match as you can’t afford to get behind on the Silvers on this Pond. I started to feed heavily with the GB/caster combo down to the left hoping I would draw the Carp away from my in front swim which I changed to loose fed caster. The danger was I would draw more Carp up from the Sedges which were all waving about just as if the Carp were spawning (which the weren’t). This worked to an extent with the Carp catch rate falling, keeping a few Silvers coming. Over the match I landed 16 Carp to 8lb, averaging 3lb and 2 Crucian’s. My Silvers weighed 34lb 12oz.

Very enjoyable if a tad frustrating with an amazing weight sheet. I could do this twice a week.

The match was won by Tom Thick (pictured right with one of his nets of Silvers) with 67lb 4oz from peg 9. Tom caught on soft pellet fished over GB at 10 metres.

On the way home I photographed a leafless tress with hundreds of Starlings preparing for the evening sky dance (pictured lower right). 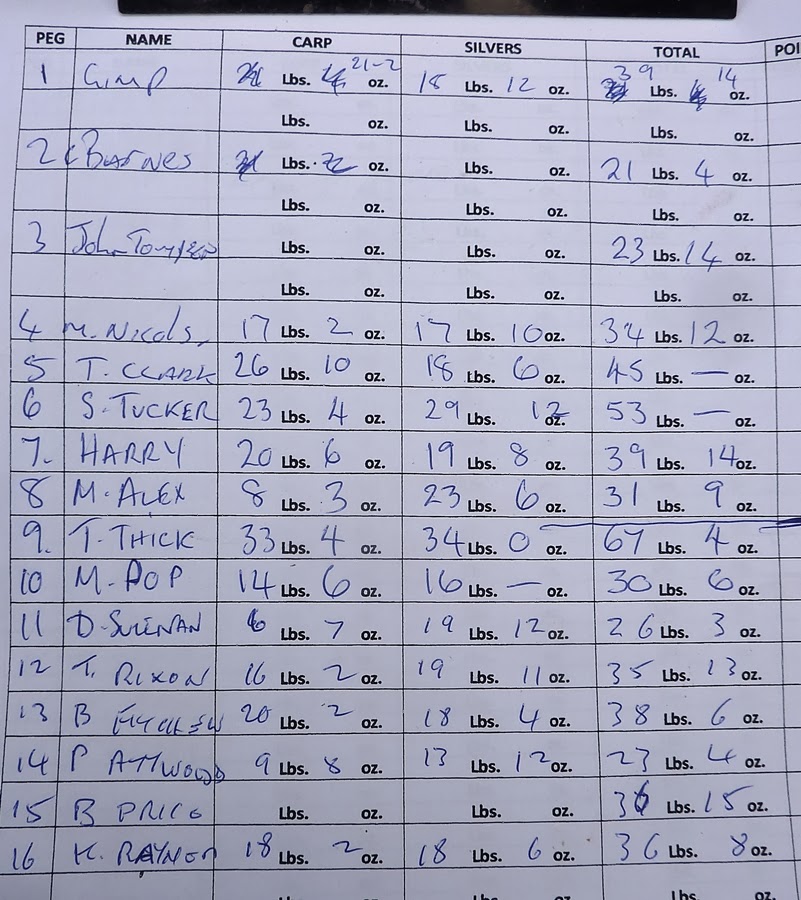 Posted by Silverfox Match Angling at 19:42