It was the last of the five winter league matches and I was hoping to get a good peg on avoiding any of the five spill over pegs on Carey. 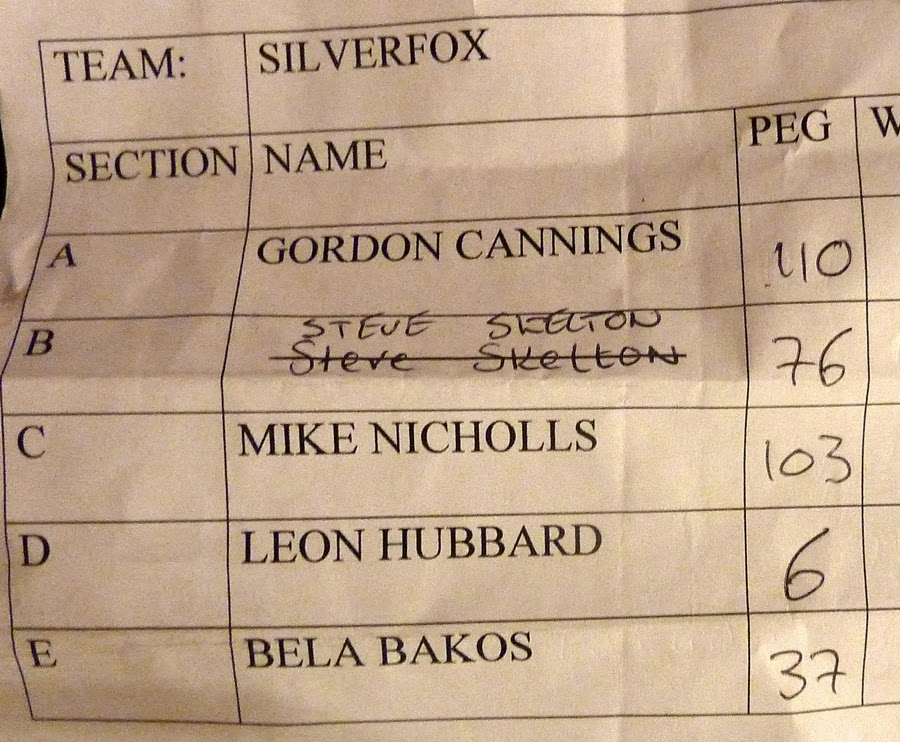 Team Captain Bela came back with the draw (pictured right). My hopes didn’t materialise as I was placed on peg 103 on Carey. We had two good draws Bela peg 37 and Gordon on 110. The rest were indifferent to be kind.

I decided it would be Silvers only match for me setting up a 4x14 Jolly to be fished at 11.5 metres (just short enough not to un-ship). Next I set up the waggler.

I started by feeding five balls of GB laced with Pinkie and Caster at 11.5 metres at 12 o clock. I followed up by loose feeding the waggler line with casters. I started on the waggler and first cast hooked a Carp on singe caster. Playing it the waggler got caught in a floating branch only for it to catch up in the tree branch over hanging in the tree to my right. I could feel the waggler grinding the line, needless to say I lost it – bugger. I think now the high winds have subsided its time to swim clear the branches from all of the swims as a number of anglers have been having difficulties in this respect.

I followed this with a few decent Ronnie until I fed them up in the water where they wouldn’t take my falling bait. So it was time to try the pole and again first cast I foul hooked a Carp which soon straightened my hook – bugger again. Bugger again because I followed this by bumping/loosing three decent Skimmers. I re-fed the laced GB and caught some more Ronnie’s and small Skimmers on the waggler. Back over the GB and a few more small Skimmers and Ronnie’s, however it soon died so I re-fed and back on to the waggler which was slow. With only 15 minutes left I tried the GB line again and was amazed the float was rising and falling with liners. I was soon n to my first of three bream. I really wanted the match to go on for another hour as the float was still indicating liners – another bugger. 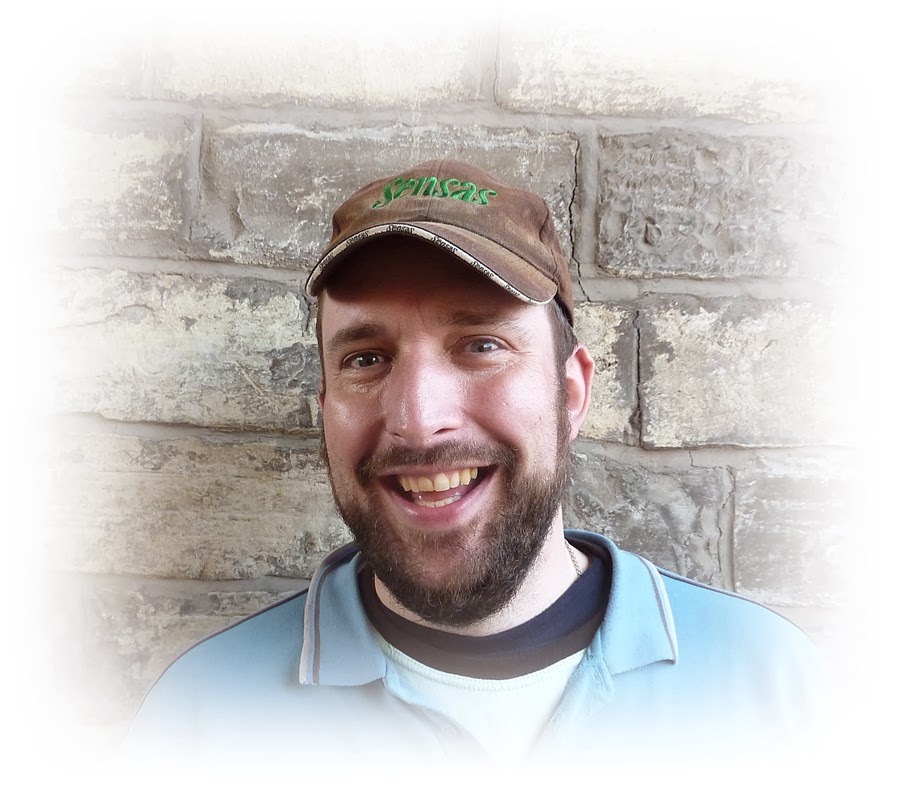 I weighed 13lb 12oz of Silvers for 9 points. Bela the Perch Slayer did well picking up third in the Silvers with 26-04-0, with Gordon coming 7th overall. Other than that we didn’t fair too well with Avon Angling beating us overall with Silverfox coming plumb last!!– last bugger.

The match was won by Martin Preston (pictured right) with 110lb 10oz from peg 115. Martin caught on the waggler with hair rigged meat over loose fed meat feeding a small tin steady throughout. 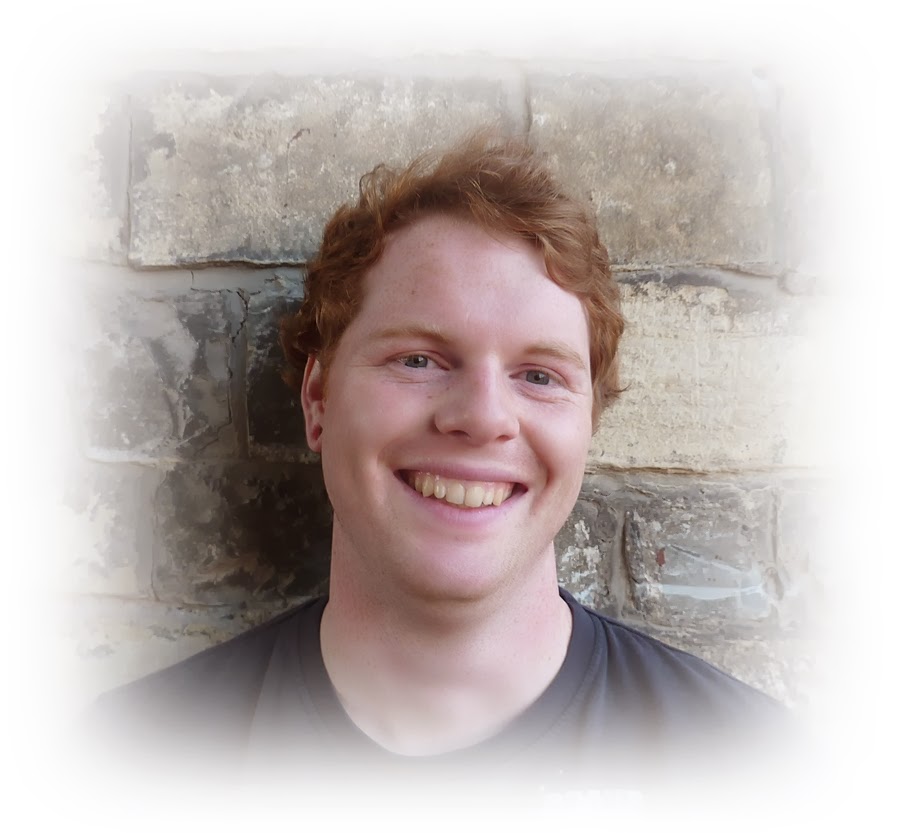 The Silver was won by “The Dude” (pictured right without hid earrings) with 30lb 3oz 0s big Skimmers from peg 16. The Dude caught at 14.5 metres with caster hook bait over GB laced with caster and chopped maggot. 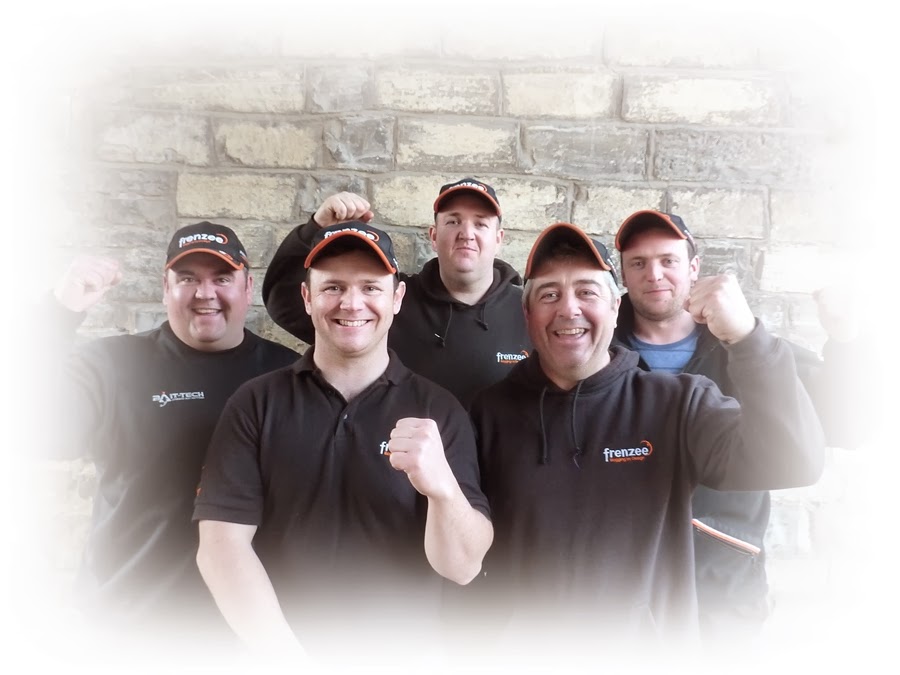 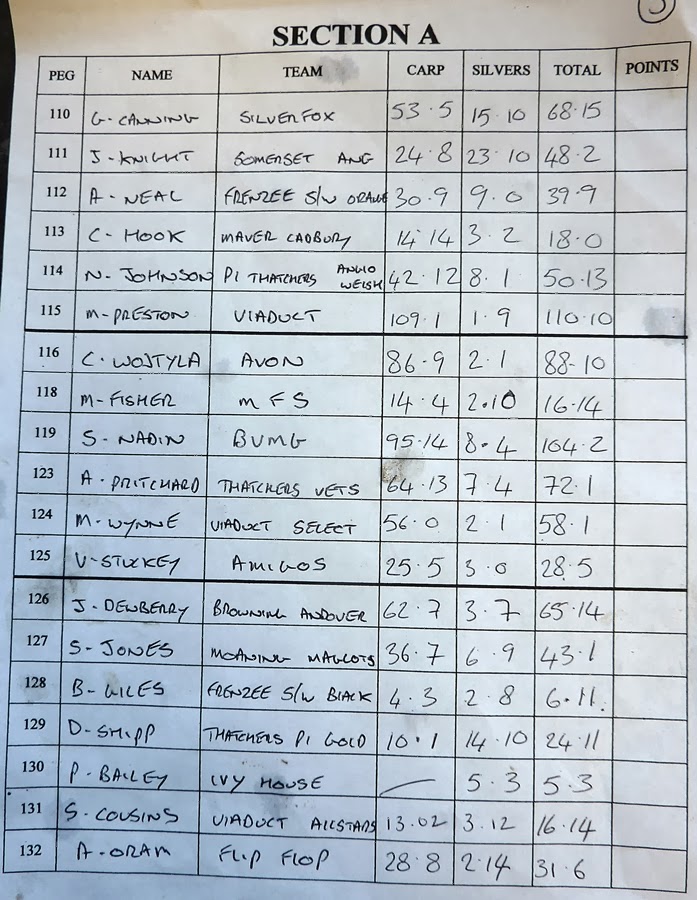 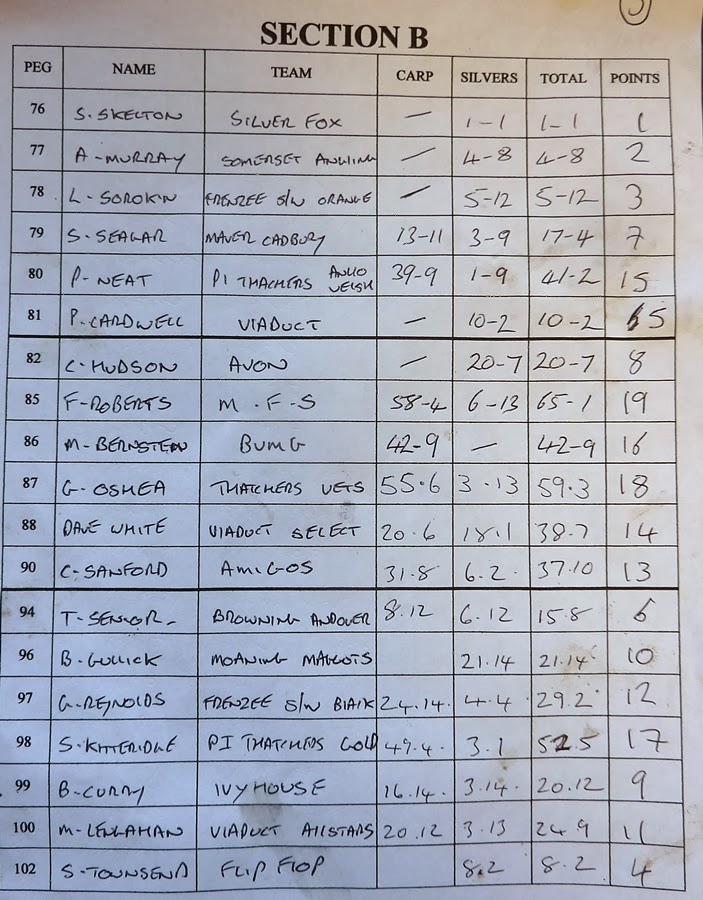 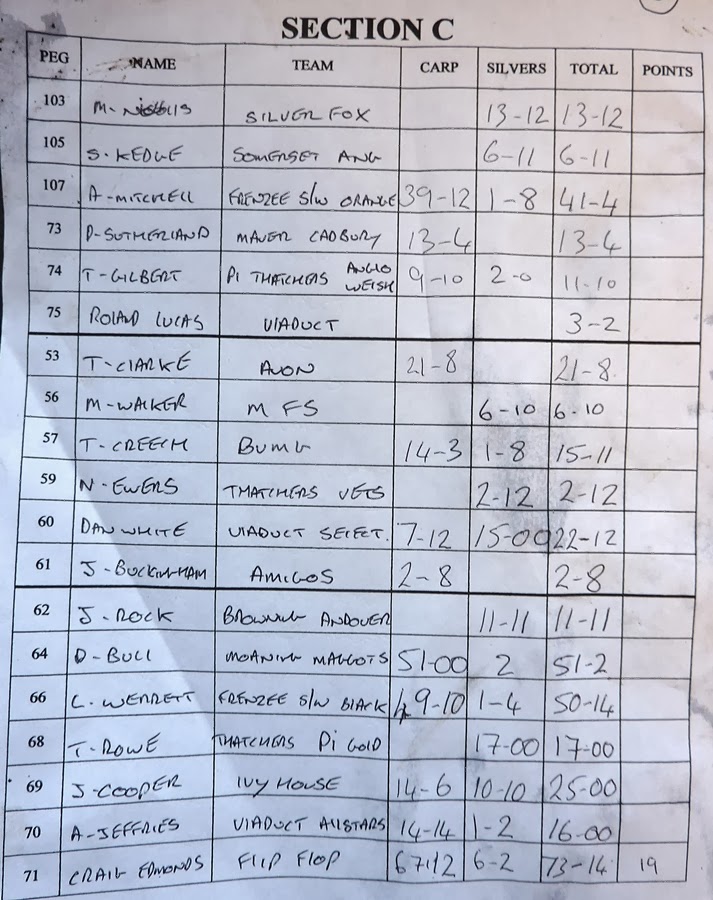 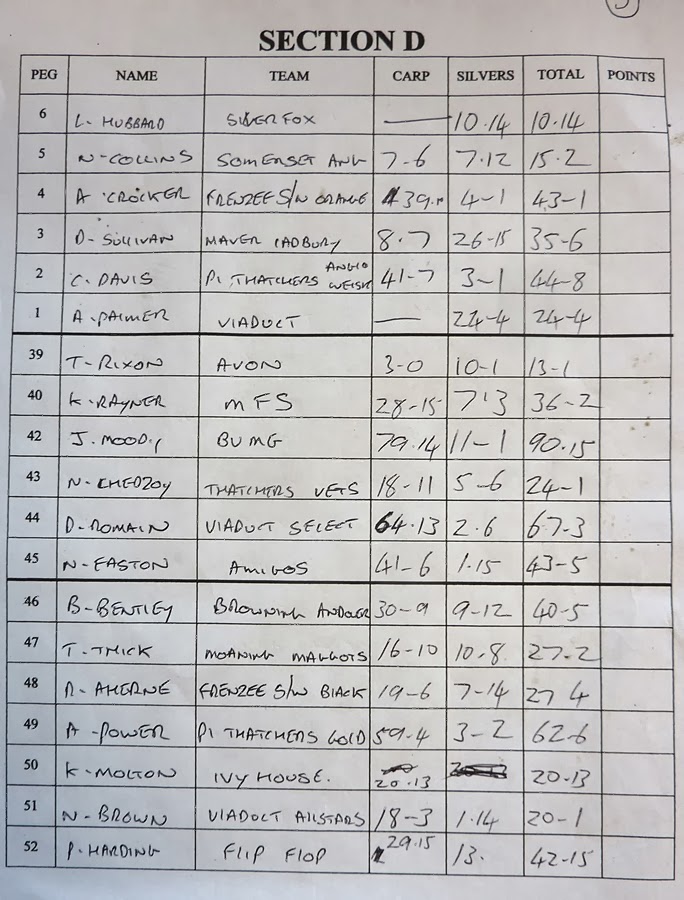 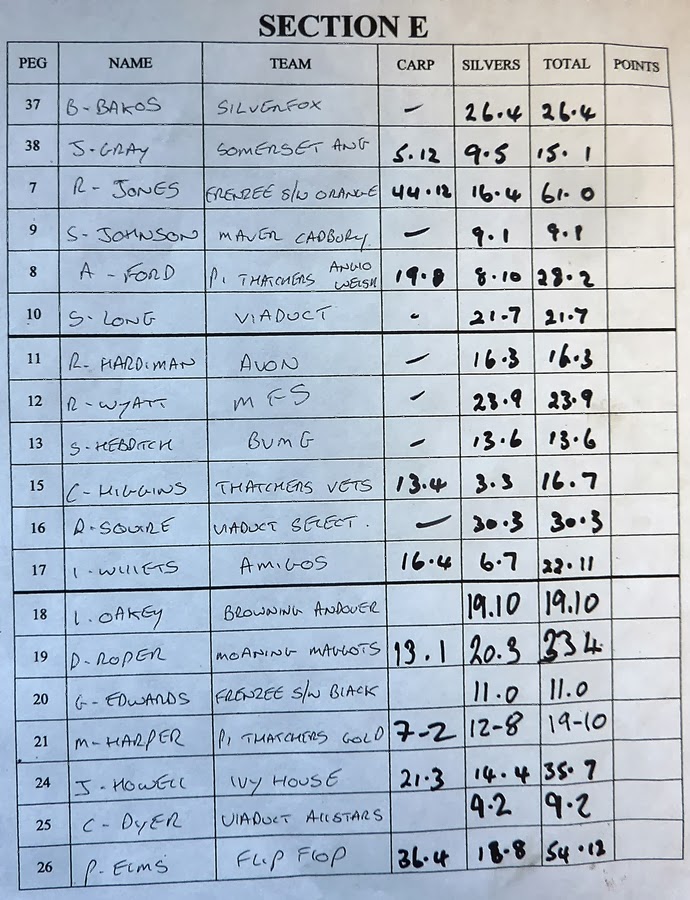 Posted by Silverfox Match Angling at 20:54