I had breakfast with Bela, Joe and Tim at the Beefeater. The weather forecast wasn’t good for this fishery with high winds up to 20 mph, anything above 14 mph makes fishing difficult on the venue. However, that didn’t prevent a good turn out with 17 fishing.

In to the draw box and out comes peg 29 – Happy with this.

Whist setting up Bob “Medium Slice” Price foul hooked a Carp on peg 32 – so a few in his swim then. See short video below.


I started at top-set plus one with the 4x18 Jolly, 6 inches up the inside shelf with 4mm semi-hard on the hook. As usual it takes a while to get the fish interested. The rig was tripping nicely against the wind. The first fish a 3oz Skimmer with another six quickly followed. I then started to loose feed micro which resulted in a 6oz Carp and a fouler which came off. I went back to potting the feed pellet. I had another run of small Skimmers; the swim went quiet resulting in a 7lb Mirror reaching the landing net. In again and after a longish wait I foul hooked a better Carp which I pulled out of. An hour gone so re-fed micro and tried the margin with triple maggot over the earlier potted maggot. It wasn’t long before I had another decent Carp. Re-red with maggot and tried the Jolly line again with the semi-hard finding the swim had really slowed in conjunction with the wind picking up and the presentation deteriorating, with the rig stuttering along with the wind. I decided to abandon this line to focus on the margin swim with my 4x10 Drennan wire stem chop and triple maggot. The upshot was it was a bit of a waiting game landing a total of eight Carp with one weighing about 1lb. The other seven were a decent size. At no time was it fanatic to say the least. I fed about 1/4 pint of live reds and similar amount of pellet. 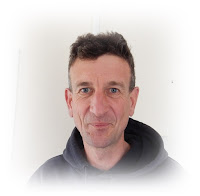 My few Silvers weighed 4lb 4oz and my Carp bag 49lb for a total of 53lb 4oz for second overall – again!

The match was won by Nick Saunders (pictured right) with 66lb 4oz from peg 16. Nick caught down to the end margin with 6mm meat hook bait fished over 6mm meat.

The Silvers was won by Bill Ferries (pictured lower right with his catch) with 9lb 8oz from peg 2. Bill caught on his top-set with single maggot fished over GB laced with maggot. 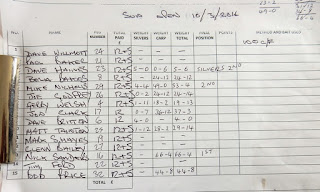 Posted by Silverfox Match Angling at 19:53