Bela is back from his successful trip down to the Stafford Moor’s Autumn Festival where he came Joint fourth overall, throughout the week picking up over £500. We travelled together again breakfasting at Canards Well where we met up with Tony Rixon and Fabio who we needed to follow to the venue.

The league payouts are for the 1st and 2nd in section only. Silvers in with the Carp – overall weight count. Draw for first section then rotate around the four sections one point for win etc…The fishery provided brand new keep nets which I thought were very robust and probably needs to be.

In to the draw bag and out comes A section and peg 7. Having only fished the venue the once I don’t know the venue that well. Fred Roberts told me it was a good peg. Arriving at the peg I was delighted to find I had plenty of open water although a short margin. Opposite me I could see Tony Rixon and Bela who were in D section.

As I did reasonably well on my first visit I decided to fish it similarly. So I set up a 4x14 Jolly although if the wind was less I might have got away with a 4x12. The plan was simply to fish soft 4’s or 6’s pellet over softened 4’s at 6 metres. I set up a 4x12 jolly for the LH margin where I had reasonable depth for maggot over maggot. In addition I set up two paste rigs for both swims.

On the whistle I fed a big pot of maggot as far down the LH margin that I could. I started at 6 metres over the soft 4’s with the same on the hook and had a 3lb Carp first put in, and again second put in. Good start. I had re-fed after every fish and started to foul hook fish none of which I landed. Tony opposite was also having foul hooking problems. I found this frustrating. I tried various feeding methods including dump feeding some micro, I even tried the paste which was totally ignored by all species. I  then tried the margin with a bunch of maggots and finally the paste rig and didn’t have any indication on either what’s so ever – not even a Ronnie. I abandoned all my rigs accept the 6 metre Jolly which I spent the rest of the match on finally sorting out a feeding pattern which reduced the foul hooking but couldn’t hold the fish for long, picking up three or four then having to wait for them to return. I did catch steady throughout the match landing five tiny Skimmers (all caught on the drop) and about 30 similar sized Carp for 91lb 3oz for a section win and third overall. I had 45lb 15oz in one net and 45lb 4oz in the other – not a bad split. 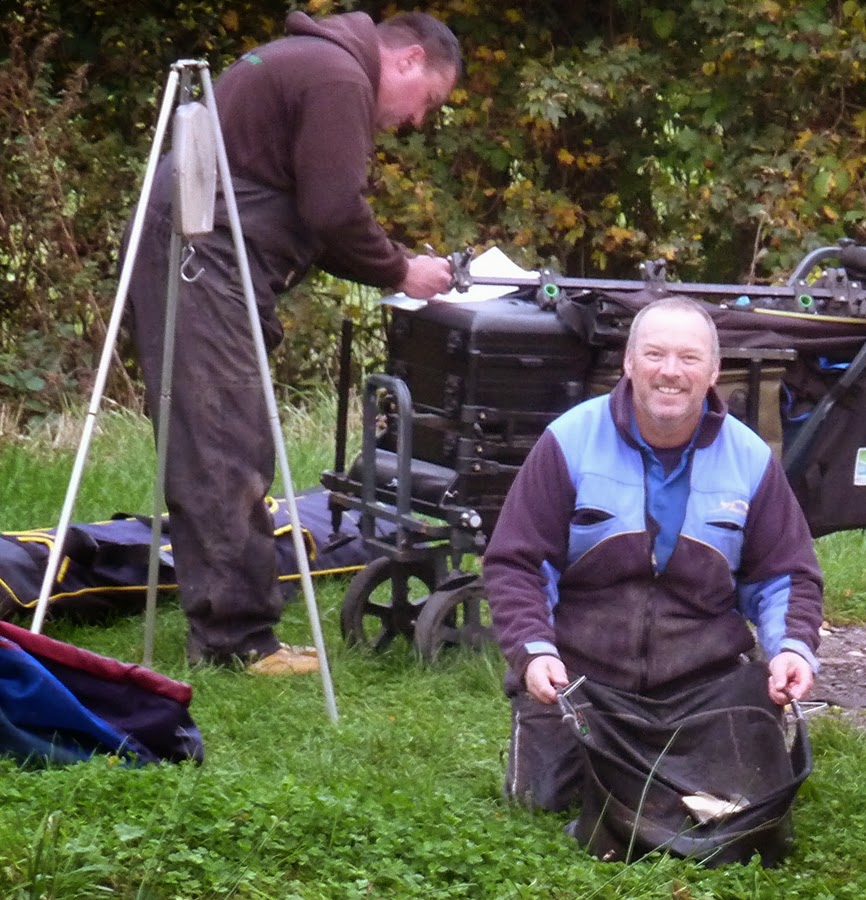 The match was won by Tony Rixon (pictured right being weighed in with Bela) with 156lb 2oz from peg 38. Tony for four hours was getting spannered by matey Bela off the next peg using Tony’s favourite long pole method. I did enjoy this part giving me some amusement, it don't happen often. As usual Tony pulled a rabbit out of the hat by switching to long down his RH margin catching Carp to 10lb on six maggots – it was then good night Bakos and good night the rest of us!! See his blog for details.

Posted by Silverfox Match Angling at 12:54