Having had breakfast in Shipham’s Boudoir (back shed) where Bela, only known to Stella had a medium breakfast.
It was my turn in B section – the best section of all. I didn’t mind where I drew (this always helps) but peg 9 would have been my choice. Having fought off a couple of Thyers lads I managed to get in to the draw container first. Guess what, out comes peg 9 – yippee. 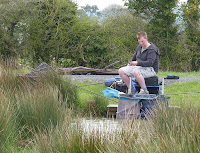 Once again I had Dave Poole on next peg 8 and it wasn’t until peg 12 that I had the next Angler – Tom Thick. Who on earth comes to a match wearing flip flops and shorts when the temperature is 2 degrees – the lad pictured right does – Tom was shivering from tip to toe when he came round to me during the weigh in.
I was pleased with the peg because I could fish the far bank with less than 11.5 metres. However, the wind was quite stiff and bloody cold, coming in at me at 1-o-clock. I went for two rigs: 1 - 4x12 Jolly for the fat bank with a 20 – 808 to fish corn, maggot and soft pellet, plus an optimistic 0.3 paste rig. I was ready to start fishing at 9-45 so had to waste time until the all in at 10-30.
I started by feeding a few micro at 10 metres out on front and at 2-o-clock where I found a flat shelf. Starting on the 4mm soft pellet resulted in no indications. So switched to the corn and what followed for the next 1½ hours was the most frustrating and baffling time I have had fishing for many a year. I must have had 40 bites missing the lot. I switch back to soft pellet thinking it was liners only for the float to sit there unregistering. The same was for maggot. Back on the frustrating corn and I had a small Skimmer followed by a F1. This was no good. So I picked up the paste rig and caught Carp straight off, landing six in six put in’s. That was it I decided that I would stay on this until the end opening a paste line down to the left on my top set. By switching between the two swim I kept Carp coming regularly to near the end. I wasted the last 15 minutes in the margin because my hands were no playng up knowing that I could catch another Carp or two during this tome fishing over – this cost me a section win as it happened.
My few Silvers weighed a generous 4lb which did include a anorexic Tench and my 19 Carp 98lb 10oz. This left me second overall with 102lb 10oz a section second by 1lb 13oz – bugger – why didn’t I go back over – I knew what I should have done at the time – bugger. 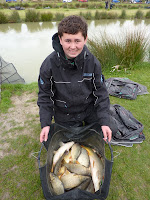 The match was won by junior Joe McMahon (pictured right with some of hi catch) from peg 40 with a credible 104lb 7oz. Joe caught over, shallow (18 inches) with banded pellet over loose fed hard pellet – well done Joe.
The Silvers was again won by Mark Broomsgrove (pictured lower right) with 34lb 6oz from Canal peg 3. Mark caught on maggot over GB.
Full Result: 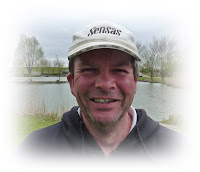 Posted by Silverfox Match Angling at 20:57