Bela recently finished his front garden patio (pictured right). There are a number of different sized phallic symbols. I couldn’t quite understand the theme. Then the penny dropped – It’s a burial ground for his past pets – Dog, Cat and three Hamsters!!!

Arriving at the fishery after a breakfast at the Lillypool Café it was off to the fishery and Mike Duckett has installed a new access gate. Luckily Mike realised that many of his fishing clients e.g. Trigger would need instructions on how to open and close it (gate sign picture lower right).

With all three lakes in I closed my mind as to where I wanted to draw. So I was initially delighted when I pulled peg 11 on . The last time I drew it I weighed 45lb of Silvers, however, the peg has declined over the past few months, but there were worse pegs in the draw container. Bela drew peg 17, almost opposite.
For company opposite I had Tom Thick, who promised me he would be quite today – I thought it a bridge too far especially as Mike Duckett wasn’t in ear shot. I was right Tom just can’t help himself – amusing though – at times. I was also up against it for the one pool – my target today.
I set up three rigs:
1x 0.4 gram caster rig for down to the platform of peg 12 for caster over casters with the target being Perch.
1x 4x16 Jolly to be fished at 10 metres in the deepest part of the swim at 11 0 clock and at 1 0 clock in the shallower part (12 inches difference)
1x4x12 to be fished at 13 metres over to the island, for hopefully a few Ide and Chub.
I started by feeding half a pot of casters down to the peg 12 pallet and a few micros and maggot in to the deep swim at 11 o clock. This swim didn’t produce a single indication and came to the rapid conclusion that the fish were not down in the cooler water. So I fed the shallower swim identically, but before trying it went down to the pallet with double caster. I wasn’t long before I netted a 1lb 8ox Perch. Unfortunately next put in I lost won of a similar size. Other than a few small perch, that was it for this swim, especially as the wind had now blown some surface scum around the pallet making it difficult to get the bait in cleanly.
Over the 10 metre shallow line produced nothing on either soft pellet of maggot. I was fishing badly for the Silvers.
It was over to the island at the full 13 metres with double maggot over kinder potted maggot and micro. This resulted in three foul hooked Carp with just the one 3lb Carp getting in the keep net, but only after I did the keep net shuffle with the top set!
Things were desperate. The only option left to me was to try the GB on the 10 mere shallow swim. So in went one balled laced with Pinkie and I was surprised to get a bite and land a decent Skimmer. This one was followed by another three before I hooked the last one which unfortunately I lost because the elastic connector went over the kinder pot so was playing it on the top set – bugger.
My four Skimmers and few perch went 12lb 10oz for just 2oz out of picking up the – bugger. 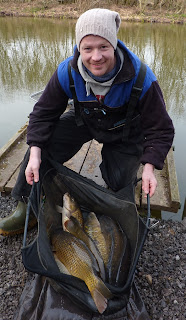 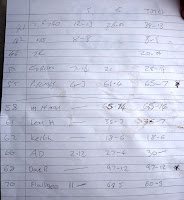 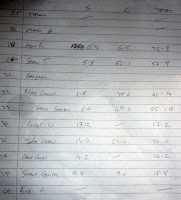 Posted by Silverfox Match Angling at 21:00

Good blog, enjoy it every week. Inspired me to start midsectionblues.blogspot hope you enoy reading about lesser talent like myself.

keep it up foxy good blog