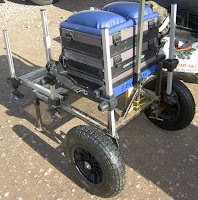 Geoff and I had a very cold breakfast at Hanham Wetherspoons – especially the beans.

Chris Orris is always adding to his kit and today saw the first appearance of his new wheel barrow wheels – pictured right.

There was twenty one fishing today so some difficult pegs in the draw bag. Because Withy Pool is in a semi-valley the wind can make presentation very difficult; as was the case today; hardly anyone would be exempt.

In to the draw bag and out comes peg 47. When the Pool was well stocked with Silvers this was the boss peg for them. However, recent results have proved the opposite. For company I had Paul “smiler” Haines on peg 45 and John “Gas” Smith round the corner on peg 48; around from John on the end peg 49 was Titch (pictured right our scales person today). I enquired the reasoning to his nickname. Apparently he got it from all the girls he went out with when a teenager.

With the match split in two I planned for Silvers in the first half and Carp the second. I anticipated catching well on the waggler so set that up first, next a 4x16 to fish at top-set plus three where it was 8 foot deep. Last a 4x12 to fish the margin to my right in three foot of water at top-set plus 2; well away from the bridge gap – so I thought!

The first half was very poor for the Silvers catching only three Ronnie’s on it. The tow was quite bad making presentation poor. The pole line where I had fed a ball of GB laced with casters and DR’s did produce four small Skimmers before it completely died. I thought I would swap to 4mm expander over micro; which worked better catching some more small Skimmers and the odd Ronnie, but this didn’t last long either. I was glad to hear the half time whistle. Only two Carp were weighed. Back in the saddle and time for Carp down the margin with 6mm expander where I had fed some hard fours. First try and I’m playing my first Carp. Unfortunately, it straightens the hook – a big fish definitely in the mouth. Re-fed and tried the other line and hooked another big Carp. It’s amazing how they know where the bridge gap is. What followed kept all those that could see me (and there were far too many) amused for 15 minutes whilst I was walked along my peg to the Bridge. Twice the float got caught in the margin brambles where I thought I had lost it, but managed to free the float each time to find it still attached. I managed to recover and thinking all the time the hook length must be getting more vulnerable all the while; and that’s what caused me to finally lose it. The upshot was my hook found six big Carp with three fouled and three in the mouth. I lost the lot. There were quite a few Carp lost today peg 44 -7, peg 45- 5, me 6, peg 48-2 and peg 49-3. The Carp are starting to wake up but not quite feeding properly.

The match was won by Gerry Walsh with 64 lb 9 oz from peg 54. Gerry caught on the pellet waggler over to the rope fishing two foot deep. Two of his fish took the scales round to 32 lb.

The Silvers was won by Tony Rixon with 19 lb 6 oz from peg 61. Tony didn’t start catching until his Pheromones arrived. A lot of worm chopping going on. See his blog for more details…Runner up was Hughie Evans (pictured right) with 14 lb 8 oz consisting mainly of three big Bream.

Geoff promised the repeat of the eye candy that was serving last visit, a slight disappointment but not entirely wasted. We were joined by Mr and Mrs celebrating their anniversary with a candle lit meal.

Posted by Silverfox Match Angling at 09:51