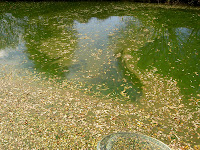 The gout was a lot better even though I had a bad night. So I decided to fish the local Carps AC match at Tan House Farm especially as the weather was absolutely perfect (19 degrees today). Steve Jefferies and I rescued Colin from the pegging as he is having problems walking; he is now using a walking stick. I drew peg 1. I was a bit disappointed especially when I got there and found that the little wind had started to blow in to my end. This can be good for the fishing, however, there were a lot of thick green algae and leaves covering most of my swim (it wasn’t like that when we pegged it). This caused me problems all through the match (see picture above). I set up one rig that would cover all of my chosen options. I decide on a CW&C line at 10 metres at 10 o clock and a pellet rig at the same distance at 2 o clock. There was only three inches difference in the depth. I marked the difference in depth with a black marker pen on the rig line sighted against the top float rubber – this is very precise and prevents having loads of white tippex marks on the top set. I started on the worm expecting a bite straight away – nothing. Over the same line with double red maggot – nothing. After 30 biteless minutes I switched to the 3mm expander pellet. On the hour mark I had a bite which I missed. I then had a 4oz Skimmer. The word on the bank was only a couple of small fished had been caught, which was enough to keep me going. Over the second hour I had five more fish. Then the fishing improved catching the odd 4oz Skimmer very steadily. The dilemma was whether to re-fed or not. I chose to feed, and potted the same amount as the initial feed - 125 ml of micro. It went quite for half an hour I then started to catch at the same rate as previous. I ended the match with 25 Skimmers for 6lb 12oz which was enough for second overall and a pick up of £30.

The match was won by Mike Snudden (pictured right) with 19lb 2oz of Skimmers from peg 4. Mike alternated between Maggot and worm hook bait fished over chopped worm. Mike fed ½ Kilo of worm. Mike said once he had run out of worm he stopped catching.

another quality cool cool weather venue to avoid then